How Animals Rescue Us 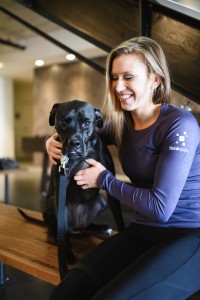 believed in a higher power, but I never anticipated truly finding myself in the eyes of a pit bull. I believe relationships between dogs and humans don’t just happen, they are purposefully connected in a strange yet meaningful string of events. You may get a dog because you have kids, you need a companion, or you think you need those things but really are searching for something different. What I have found is that you don’t choose a rescue dog… you choose each other. You choose each other, one mishap, one internal issue, one belly rub/massage at a time. In my case, Darla rescued me just as much as I rescued her.

Before I met Darla I had been living with an eating disorder for five years. In and out of treatment, never looking at myself like I was beautiful or worth it. I would work out for hours a day and not refuel because it didn’t matter to me. I just wanted to be skinny and attractive. One night when I actually decided to put on a sexy dress and put on some makeup I was raped by three men who dragged me into an alley on Capitol Hill in Seattle. They took turns having their way with me and left me there to find my way which I already knew was lost. I was just another innocent woman that they decided to attack. It was never going to happen to me. But it did.

After the incident I decided to take a trip by myself to Joshua Tree National Park. I had never been on a solo trip nor ever thought about it. But I went. I put it all on a credit card and I went. After two weeks of deep diving, meditation and journaling there was one common theme: I needed a dog. I have always 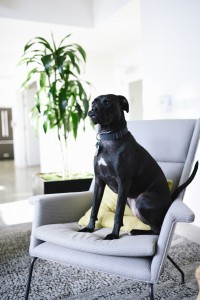 been part of groups to raise money and save great dogs from around the state that didn’t deserve to be euthanized. Specifically, pit bull and Rottweiler mixes. And it just so happened that while I was in Joshua Tree I got a notification that a litter of puppies was going to be euthanized in Texas. A litter of puppies that had been kept in a dirty back yard with nothing other than abuse by a large man, So I bid $200 to get them sent to a safe shelter. I knew these puppies could turn out to be something more.

When I returned from California I visited PAWS (animal shelter) over the next few weeks thinking that maybe one of the litter would show up. No luck. But then one day she did. She showed up. Out of the nowhere she was there. “Dancer” the pit bull/boxer/labrador mix was pawing at my Mom and me. She had been returned by the previous adopter. All she ever knew was abandonment, denied everything life is supposed to provide. It wasn’t until later that I found out her name was “Dancer” because they forced her to be on her hind legs all the time to entertain the humans. Let’s just say it’s still hard to keep her down, but that’s one of her quirks and we love it.

She was one-year-old and scared. She wouldn’t eat and she didn’t trust me. But while taking her home she had a bit of a diva moment, taking no guff and or food.  She was a rebel, reminding me of Darla from “The Little Rascals.”

Darla and I grew from there. Somehow this dog and I bonded over our respective hardships. She growled at every man that walked by, especially if she was on a leash protecting me. She couldn’t be around other dogs because she was worried they would attack her. She was broken. Dancer wanted to jump up on people because she was trained to be on her hind legs. She had no idea what being a normal dog looked like.

Darla came into my life for a reason. I don’t know if I believe in God but I absolutely believe there is a higher power that brought us together. Darla is anxious, needs love, is over-aggressive when she thinks she needs to be, confused, empathetic, but is the cutest thing I have ever seen in my life. Darla 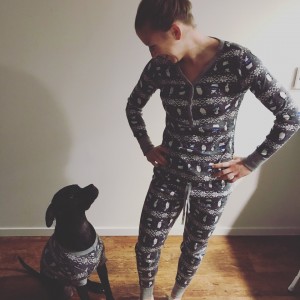 is my doppelgänger. We feel the same things, we need the same love, we understand each other. If you ask my partner, he thinks it’s insane how alike we are. My best friend in this entire world came in the form of an abandoned and abused but beautiful creature—with scars that cut deeper than anyone will ever know. But she will always be right by my side and I will always be right by hers. That crazy little puppy that wishes she could be a cycling instructor. That’s Darla.

Darla is a pit bull, but she doesn’t know that. At some level she realizes she was abandoned and needs to protect herself from that happening again. Pit bulls are strong and built like bulldozers. But pit bulls aren’t made for fighting. Let them be strong and amazing beings without forcing them to fight for their lives. Pit bulls are the most loyal breed and are only bred to be aggressive if we make them be.

Darla is beautiful and has saved more than just my life. That’s the power of rescuing a dog.